Use the power of regular expressions to cleanse your data right there inside the Data Flow. This transformation includes a full user interface for simple configuration, as well as advanced features such as error output configuration.

Two regular expressions are used, a match expression and a replace expression. The transformation is designed around the named capture groups or match groups, and even supports multiple expressions. This allows for rich and complex expressions to be built, all through an easy to reuse transformation where a bespoke Script Component was previously the only alternative.

Some simple properties are available for each column selected –

Behaviour
The two behaviour modes offer similar functionality but with a difference. Replace, replaces tokens with the input, and Emit overwrites the whole string.

Match Expression
The expression used to define the named capture groups. This is where you can analyse the data, and tag or name elements within it as found by the match expression.

If you want to use regular expressions to validate data then try the Regular Expression Transformation.

Parse an email address and extract the user and domain portions. Format as a web address passing the user portion as a URL parameter. This uses two match groups, user and host, which correspond to the text before the @ and after it respectively.

Behaviour is Emit, and cascade of false, we only have a single match expression.

The component is provided as an MSI file, however for 2005/2008 you will have to add the transformation to the Visual Studio toolbox manually. Right-click the toolbox, and select Choose Items…. Select the SSIS Data Flow Items tab, and then check the RegexClean Transformation from the list. 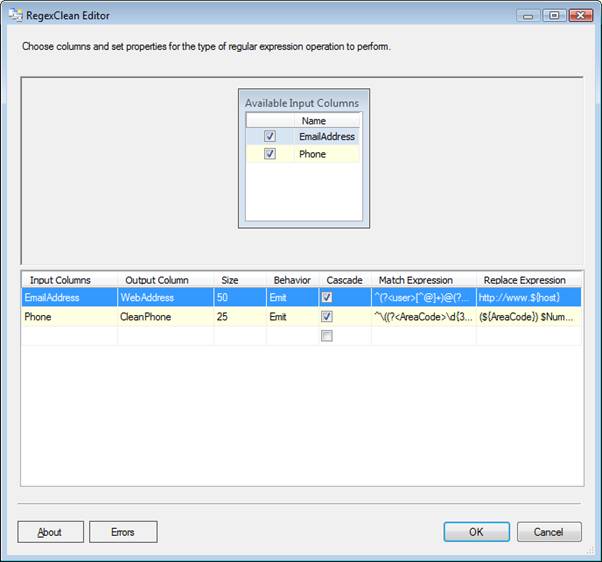