Surrogate keys are generally considered fundamental building blocks of a data warehouse. They are used as identifiers for dimensional members and enable us to manage slowly changing dimensions.

The Row Number Transformation can be used to help generate surrogate keys.

When you drag a script component from the toolbox to the design surface you will be prompted as to whether the component is to be a source adapter, a destination adapter or a transformation. Select Transformation.

Your script component should contain 1 input and 1 output. This is to be a synchronous transformation so the SynchronousInputID property of the output must be the same as the ID property of the input. The output should have 1 column which in this instance I have called SK. 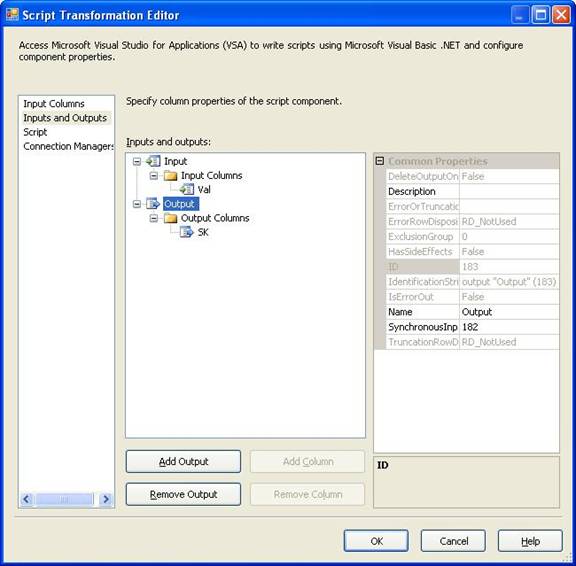 Note in the screenshot above the SynchronousInputID property of the output is set to the ID of the Input thus indicating that this is a synchronous transformation.

We are going to use managed code to populate SK with an integer that acts as a surrogate key. 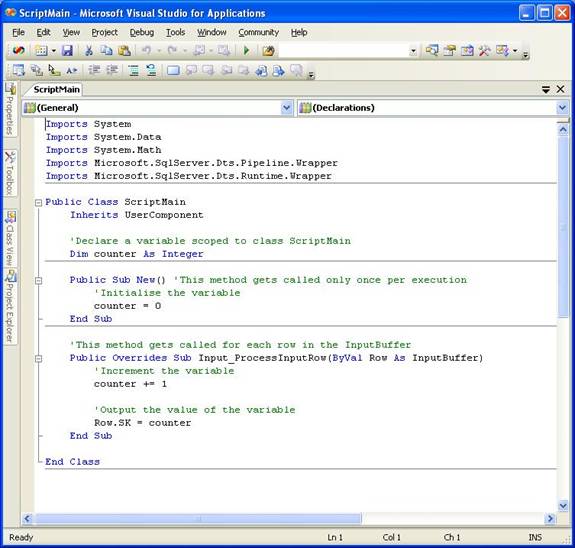 There are four things to note about what is going on here:

And that's it! Its all very simple. Naturally your surrogate key values won’t always start from 1 as they do here but you can build on this method to pass in the current maximum value of the surrogate key in question in order to initialize counter.

The example package that has been illustrated above can be downloaded (7KB) Generating Surrogate Keys.zip. It is very simple to run as it does not require any configuration. The synchronous nature of the script transformation is demonstrated by passing through 100000 rows of data. Download it and try it out!