The Checksum Transformation computes a hash value, the checksum, across one or more columns, returning the result in the Checksum output column. The transformation provides functionality similar to the T-SQL CHECKSUM function, but is encapsulated within SQL Server Integration Services, for use within the pipeline without code or a SQL Server connection.

As featured in The Microsoft Data Warehouse Toolkit by Joy Mundy and Warren Thornthwaite from the Kimbal Group. Have a look at the book samples especially Sample package for custom SCD handling.

The Checksum Transformation uses an algorithm based on the .Net framework GetHashCode method, it is not consistent with the T-SQL CHECKSUM() or BINARY_CHECKSUM() functions. The transformation does not support the following Integration Services data types, DT_NTEXT, DT_IMAGE and DT_BYTES.

There ChecksumAlgorithm property is defined with an enumeration. It was first added in v1.3.0, when the FrameworkChecksum was added. All previous algorithms are still supported for backward compatibility as ChecksumAlgorithm.Original (0).

Installation requires Administrative privileges on the install machine. The task is provided as an MSI file which you can download and run to install it. This simply places the files on disk in the correct locations and also installs the assemblies in the Global Assembly Cache as per Microsoft’s recommendations. For SQL Server 2008 and below, you will have to add the transformation to the Visual Studio toolbox by hand. This process has been described in detail in the related FAQ entry for How do I install a task or transform component?, just select Checksum from the SSIS Data Flow Items list in the Choose Toolbox Items window.

The Checksum Transformation is available for all versions of SQL Server from 2005 to 2016. Please choose the version to match your SQL Server version, or you can install multiple versions and use them side by side if you have more than one version of SQL Server installed. 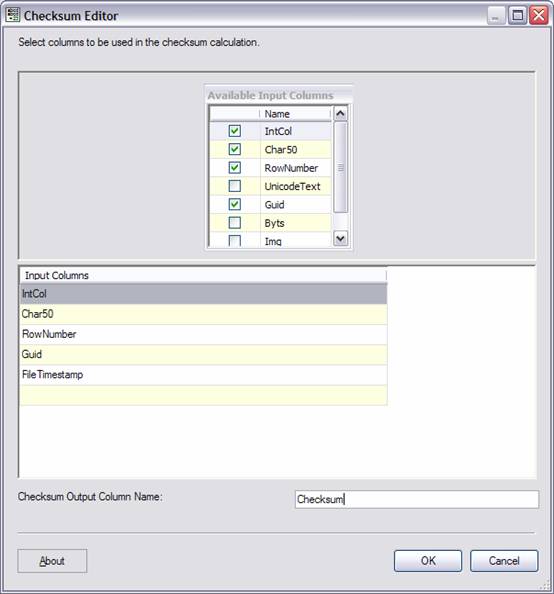